My formal education is more oriented towards business, but during my time in college I tried to focus on learning tangible skills as much as possible, and computer science/programming started becoming more my niche over time vs. business. I am working towards a Master’s in Data Science at the University of Denver and I live in Boulder, Colorado.

I was born and raised in Milan, Italy and moved to the middle of Manhattan with my American mom when I was 16 where I finished highschool. I ended up coming to Boulder after reading a book about ultra marathon running and I could really see myself living in Boulder running with a husky dog training for ultra marathons, so that’s what I did: 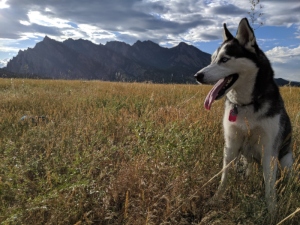 I also have an adorable little ferret: 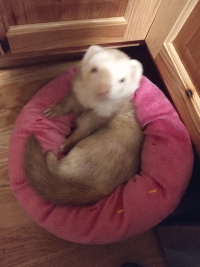 I spent my time as an undergrad at the University of Colorado, Boulder studying information management and being a part of the CU Triathlon club team. As a Junior at CU I was one of the TA’s for MGMT 3200 (Business Analytics) after really enjoying the course, which used Alteryx for doing ETL work, and a tool called DataRobot for making predictions. The grade obtained by students in the class was strongly impacted by their team’s percentile ranking on the leaderboards of real Kaggle competitions that were going on at the time, and I found myself really loving working with data and I have been trying to learn as much as I can about anything and everything relating to data science since then. I spent multiple summers locking myself 40+ hours a week in my office working on just that.

Here are some of the online courses I worked my way through:

Here is my resume with the same online learning certificates added to it:

Thanks again to Nick Strayer for the awesome template

In my senior year at CU Boulder, I did a business analytics internship with the Pricing Analytics team at Vail Resorts, which turned out to be a lot of manual work that should have been automated, so that’s what I did. After graduating from CU Boulder I spent some time applying the things I learned around automation and web scraping to setup a project to collect data relating to the cryptocurrency markets from several sources because I had been trading on them since early 2014 and I saw an opportunity for some automated trading, and I wanted to have a personal project that I could work on over a longer period of time and use to get more comfortable in tools like SQL, R and Python with the prospect of making some money in the end. After a year and a half of working on this, I realized that I was actually better off opening up my project to others more and using it as a tool to teach others to program and that could be really valuable in my career progression towards eventually being a competent data scientist rather than spending all of my energy trying to make short-term trades, which doesn’t really teach any tangible or useful skills outside of its own domain. The tutorials and lessons I am building specifically around this project can be found on https://predictcrypto.org/.

Today I am working towards a master’s in Data Science part-time online and working on creating more research (including a more legitimate research paper with two professors) around the PredictCrypto project, and working on putting out more tutorials and content through a YouTube channel. My master’s program allows me to take one course at a time, be a full-time student, or do anything in between, so that flexibility allows me to work full-time without having an overwhelming schedule.